The Beauty Queen of Leenane on stage in Sandton

How Now Brown Cow prepares to take to the stage with its debut production, The Beauty Queen of Leenane, on at Theatre on the Square in Sandton from 4 – 29 October.

The Beauty Queen of Leenane, a theatrical masterpiece by acclaimed Irish playwright Martin McDonagh (In Bruge, Three Billboards Outside Ebbing, Missouri, Hangmen) and winner of four Tony Awards, is a darkly comic tale about the turbulent, dysfunctional, and often savage relationship between mother and daughter, Mag and Maureen Folan.

The play centres around the life of Maureen, an unmarried middle-aged woman, as she cares for her ailing mother Mag, and tries to find love. When the two brothers enter, we are set on a path to the play’s thrilling conclusion. Interspersed with romance and humour, this psychological thriller will have audiences on the edge of their seats.

The Beauty Queen of Leenane is the debut production from the How Now Brown Cow Productions stable, spearheaded by Daniel Galloway.

Says Galloway of this new venture; “It’s been two and a half years since we launched How Now Brown Cow – a new, independent South African based, global production company. It has tested our patience and resolve and we now find ourselves ready to announce our very first stage production. While we’ve had to wait much longer than we would’ve liked, we have kept ourselves busy during this period of waiting. This play by the world-renowned Martin McDonagh is the ideal production to launch with.”

Galloway continues; “The Beauty Queen of Leenane is a powerful piece of writing and offers an excellent vehicle to our all-star line-up who together will deliver a world-class piece of theatre. We could not be more excited about our first outing! And as we emerge on the other side of what has been a brutally difficult period for everyone in the theatre sector, I encourage you to buy your tickets and come and see just how good South African talent can be!”

The debut Johannesburg season of The Beauty Queen of Leenane will run at Theatre on the Square in Sandton from 4 – 29 October 2022.

Performances will run at 20:00 from Tuesdays to Saturdays, with an additional 15:00 matinee on each Saturday of the season.

The production carries a suggested age-appropriate restriction of no under 12s.

Bookings can also be made via Computicket or by dialling their call centre on 011 340 8000. 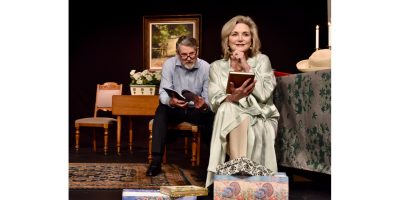 Hansard, but off the record

Sharmini Brookes: Ramsay and Hopkins perfectly inhabit the world of the middle-aged couple who know each other too well but struggle to communicate their real feelings. 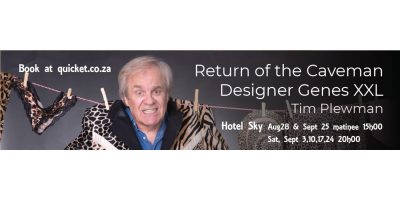 Return of the Caveman-Designer Genes XXL

By popular demand,Tim Plewman returns to Hotel Sky for another season of his hilarious, romp about men and women and the genes that bind us together.