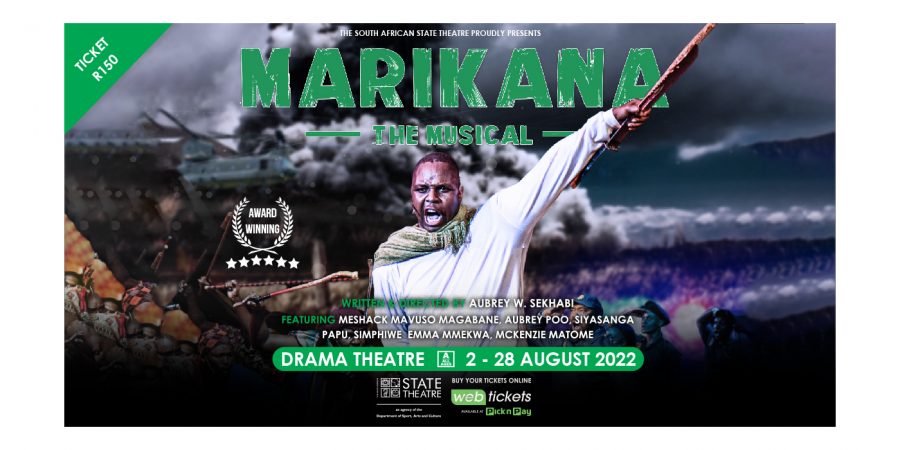 The month of August this year will mark 10 years anniversary of the Marikana Massacre which saw the killing of 34 protesting mineworkers by police in Marikana, Northwest in 2012.

To commemorate the harrowing event, the critically acclaimed Marikana-The Musical theatre production will return on stage from 02 to 28 August 2022 at the South African State Theatre(SAST). After a four years stage hiatus, the Best Musical Naledi Theatre Award-winner reassembles prolific performers, Meshack Mavuso-Magabane, Aubrey Poo, Siyasanga Papu, Emma Mmekwa, and Mpho “Mckenzie” Matome, who lead a 40-member cast and 13-piece band in unleashing a blow-by-blow account of the events that led to the loss of 44 lives at the hands of the police and the miners during the period of the massacre.

Written and directed by multiple award-winning playwright and director Aubrey Sekhabi, Marikana-The Musical is an adaptation of the book We Are Going to Kill Each Other Today: The Marikana Story penned by eminent South African writers Thanduxolo Jika, Felix Dlangamandla, Lucas Ledwaba, Sebabatso Mosamo, Athandwa Saba and Leon Sadiki. The story looks at the lives of mineworkers and their families, as well as the events leading up to the massacre. It goes back to the villages and townships where they came from and give faces and names to the fallen brothers, sons, fathers, and uncles.

On 16 August 2012, police opened fire on a crowd of protesting mineworkers who were demanding a wage increase from Lonmin platinum mine in Marikana, killing 34 mineworkers. The event was described as the biggest incident of police brutality since the advent of democracy and it revived memories of the brutality suffered under Apartheid security police.

Tickets for Marikana-The Musical can be purchased for R150 on Webtickets, which is available at the SAST, Pick n Pay, and online here: https://bit.ly/Get_Marikana_Tickets

Marikana conversation beyond the headlines

Driving the conversation beyond the headlines – Marikana 10 years on.

SISTER ACT – The musical is based on the hit 1992 film sensation of the same name and was nominated for five Tony Awards, including Best Musical.

Shy Music are thrilled to announce that tickets for the 2023 Cape Town season of Calling Us Home, from 15 – 19 February at Artscape, are now on sale.