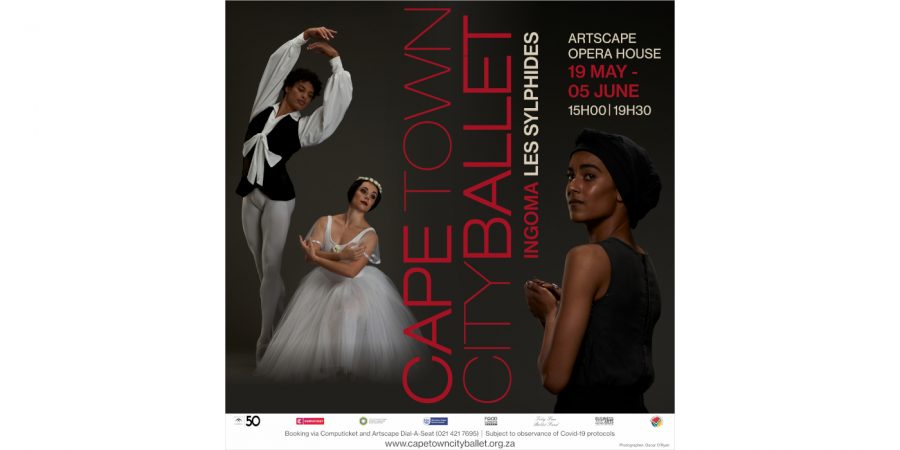 INGOMA will be performed as part of CTCB’s Autumn Season from 19 May at Artscape.

The performances in the Artscape Opera House will be strictly limited to 250 seats due to social distancing.

Commissioned by Cassa Pancho for Ballet Black in London, and choreographed by South African born November, INGOMA collected prestigious awards including the Olivier Award for Best New Dance Production as well as Best Dance Production at the Black British Theatre Awards following its premiere in 2019 at the Barbican Theatre and run at the Lindbury Theatre at the Royal Opera House.

In juxtaposition to this powerful, visceral work, audiences will be able to enjoy the pastoral fantasy of LES SYLPHIDES. Sylphs of imaginary spirits dance in the moonlight with the “poet” to the exquisite composition of Frederic Chopin.

This quintessential romantic reverie with choreography by Mikhail Fokine will be staged by British ballet luminary Lynn Wallis, who was Artistic Director of the Royal Academy of Dance for twenty-two years and who has worked with companies such as the National Ballet of Canada and English National Ballet. In 2015 Wallis was awarded an OBE for services to dance.

Audiences can enjoy a second programme of breath-taking classical and neo-classical ballet with the return of CAPE TOWN CITY BALLET – BACK ON STAGE following sold out houses in Cape Town and Durban.

It is accompanied by MOON BEHIND THE CLOUDS, a suite of works made during the time of Covid-19, by leading South African choreographers Veronica Paeper, Kirsten Isenberg, Yaseen Manuel, Lindy Raizenberg and Marlin Zoutman. The lyrical dancing and moving imagery is laced together through the timeless text of Max Ehrmann’s Desiderata, narrated by acclaimed performer Marcel Meyer. Nathalie Vijver is the Dramaturg for the work.

Lighting Design for the Autumn Season is by Wilhelm Disbergen.

Established as the Nico Malan Theatre in 1971, the Artscape building is celebrating its 50th anniversary in existence.

“We will be marking two momentous occasions with the opening of our Autumn Season at Artscape,” says Debbie Turner, CEO of Cape Town City Ballet.

“On 19 May 1971, the venue opened with a performance by CAPAB, the ballet company of the time. It is fitting that we use this opportunity to recognise not only how far we have come and the changes that have taken place, but also the next fifty years of ballet on the Artscape stage, and how dance can lead the way in championing change and extending boundaries,” says Turner.

“We are honoured to be presenting INGOMA, which has been extended to accommodate the Company of Cape Town City Ballet. With the staging of this ground-breaking work, we proudly celebrate the work of Mthuthuzeli in his home country.”

INGOMA is a compelling fusion of ballet, African dance and song, engaging in a universal theme about being human and being true to yourself. Inspired by the artwork of Gerard Sekoto, most particularly the Song of the Pick and his Blue Head, it explores the milestone Witwatersrand miners’ strike of 1946, imagining the struggles of black miners and their loved ones as thousands of miners bravely embarked on strike action for better wages.

South African Peter Johnson composed the music for the production, marking his third collaboration with November after Cape Dance Company’s Visceral and Sun. Asisipho Malunga completes the creative team as dramaturge and vocalist.

Please Note: The event complies with all COVID-19 regulations including social distancing and patrons must wear masks for entry.

* Invest in the work of Cape Town City Ballet! For information about how to donate to their THUNDAFUND campaign, e-mail thundafund@capetowncityballet.org.za

Born in Cape Town, Mthuthuzeli November started dancing at the age of fifteen with the outreach programme Dance For All. He was awarded a scholarship to attend the Cape Academy of Performing Arts (CAPA), where he graduated with a Distinction in 2014. At Cape Dance Company under the direction of Debbie Turner he worked with numerous choreographers including Bradley Shelver and Christopher Huggins, and created his debut work for CDC in 2014. Other productions for CDC include Visceral and The Rite of Passage, which were funded by the National Arts Council of South Africa and premiered at Artscape.

In 2015, November danced in the production West Side Story before joining the London based Ballet Black, where he created roles in works of world-renowned choreographers such as Annabelle Lopez-Ochoa. He made his first ballet for Ballet Black, Interrupted in July 2016. In 2019 he was commissioned to make two new works for the Company – Washa – The burn from the inside and Ingoma. Ingoma was nominated for 4 prestigious awards in the UK winning the Olivier Award for Best New Dance Production and the Black British Theatre Award for Best Dance Production 2020. He was also nominated for Best Emerging Artist. He has made a new work for Ballet Black, co-commissioned by the Barbican Theatre, The Waiting Game, which will premiere in 2021.

Other works include creating a solo for Precious Adams of English National Ballet, working on projects with The Chemical Brothers, Sanlam and with British artist Stormzy, headlining the 2019 Glastonbury Festival. In 2020 he was commissioned to make a work for The Grange Festival production Precipice and created a winning work for English National Ballet Emerging Dancer 2020. In 2020 he was also commissioned by Cape Town Opera to make Pergolesi’s Stabat Mater which premiered on kykNET. In 2021 November created a work for Northern Ballet titled What used to, no longer is.

Other awards include receiving an award as South Africa’s Emerging Artist at the Klein Karoo Nasionale Kunstefees (KKNK) for his solo work, a gold medal in the South Africa International Ballet Competition as a Junior in 2012, and as a senior in 2014.

Lynn Wallis trained at the Royal Ballet Senior School and graduated into the Royal Ballet Touring Company in 1965, returning to the school as Ballet Mistress in 1969, a position she held until 1982 when she became Deputy Principal. During this time she reproduced a great many ballets from classical repertoire for the school performances at the Royal Opera House and other venues.

In 1990, she was appointed Deputy Artistic Director of English National Ballet.

Lynn was Artistic Director of the Royal Academy of Dance from 1994 to 2016, where her responsibilities included setting and maintaining the standards of RAD dance training worldwide, developing the syllabus and planning courses internationally for students.

In 2001 Lynn was shortlisted for the European Women of Achievement Awards and in 2004 was nominated for an Isadora Duncan Dance Award for her work on staging Ashton’s Monotones l and ll for San Francisco Ballet.

Lynn is a Fellow of the Royal Academy of Dance and of the Imperial Society of Teachers of Dancing, a Trustee of the Dance Professionals Fund and of the Frederick Ashton Foundation, and a Governor of Elmhurst Ballet School.

She was awarded an OBE for services to dance in the 2015 Queen’s Birthday Honours.

Cape Town City Ballet is one of the longest standing ballet companies in the world. With strong heritage and roots, the organisation is moving into the next era with the objectives of delighting anew its loyal supporters as well as inspiring new audiences to love ballet, all to be achieved by delivering unique dance entertainment through integrity, creativity and excellence.

Since the Company’s inception, it has been renowned for providing opportunities for training and employment to all, despite the ruling laws of previous times. It remains committed to developing the dancers of the future, and the CTCB’s various development and education programmes have reached more than 320 000 young people. Its audience development and training initiatives include the Young Male Dancer Development Programme, the Apprentice Programme and partnerships for training programme with various dance schools.

As part of their 2021 Autumn Season at Artscape, CTCB will proudly present the South Africa premiere of Mthuthuzeli November’s Olivier Award winning Ingoma, which was commissioned by Cassa Pancho for Ballet Black and premiered at the Barbican in London in 2019.

CTCB aims to serve the dance community as a whole, and provides opportunities for teachers and young dancers in training from around the City to participate and gain experience in professional productions and attend various rehearsals. In 2019, students and young dancers took part in A Christmas Carol, Sleeping Beauty and Enemy Behind the Gates. In 2020 students had the opportunity to observe rehearsals of Maina Gielgud’s Swan Lake.