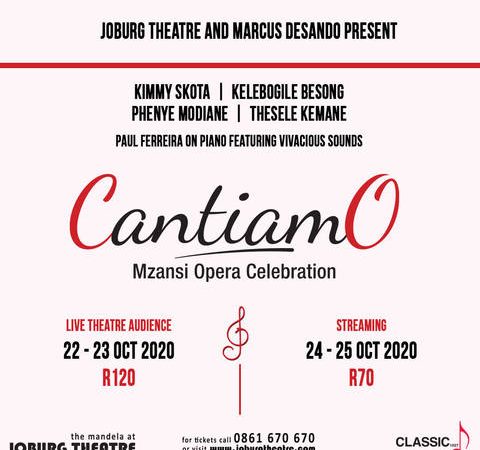 Joburg Theatre is delighted to announce it will welcome back arts and entertainment lovers to the Mandela Theatre on Thursday 22 and Friday 23 October for a special evening of world-class opera with Cantiamo – Mzansi Opera Celebration. Directed by Marcus Tebogo Desando the production will feature the internationally renowned voices of Kimmy Skota, Kelebogile Besong, Thesele Kemane and Phenye Modiane, with Paul Ferreira on piano.

With special Covid-19 protocols in place, Joburg Theatre patrons will be able to enjoy two live performances of Cantiamo – Mzansi Opera Celebration, while opera lovers worldwide can stream the production from the comfort of their homes on Saturday 24 and Sunday 25 October. All performances are at 19:30.

Already established in the opera, oratorio and concert arenas worldwide, the four South African singers will be joined by the Vivacious Sounds Choir for a wide-ranging programme showcasing some of the most beloved and recognizable opera works in the canon. The Vivacious Sounds programme identifies students with exceptional musical talent throughout schools in Gauteng and trains pupils from disadvantaged backgrounds in all music disciplines. The choir consists of 20 singers from Katlehong, Johannesburg South and Soweto, ranging in age from 16 to 35.

The one-hour Cantiamo – Mzansi Opera Celebration will feature music from Bellini’s I Puritani, Mozart’s Don Giovanni and Verdi’s La Traviata, together with a selection of local compositions showcasing South Africa’s contribution to the global opera repertoire. These will include extracts from Phelelani Mnomiya’s Ziyankomo and the Forbidden Fruit and Mzilikazi Khumalo’s Princess Magogo.

“Sadly, the pandemic has curtailed the ability of artists everywhere to perform for live audiences, but it’s to Joburg Theatre’s credit that we will have an opportunity in October to celebrate one of South Africa’s most valuable national treasures, our operatic voices,” said artistic producer and director Marcus Desando.

“The idea of Cantiamo was born out of Joburg Theatre’s commitment to presenting a diversity of artforms and, as our opera talent is sought-after worldwide, I jumped at the opportunity to put together this celebration,” Desando continued. “In addition to a range of beloved opera excerpts, we are featuring some beautiful work by a number of local composers including Mzilikazi Khumalo and choral music legend Phelelani Mnomiya, who sadly passed away unexpectedly in August.”

Joburg City Theatres CEO Xoliswa Nduneni Ngema added, “Widely recognised as one of the biggest theatre venues in the country for staging both Broadway musicals and homegrown productions, we thought it would be timely this Spring to celebrate opera, one of the most popular musical genres in the world. Cantiamo will be the first show in the Mandela after lockdown, and what a way to celebrate! We are particularly looking forward to welcoming our loyal audiences back to the theatre to enjoy these internationally recognized voices of Mzansi and also to reaching a whole new national and international audience online.”

Booking is now open and you can enjoy these award-winning artists live on the Mandela stage in this special one-hour programme for R120, or stream the performance for just R70. Visit www.joburgtheatre.com for further details.

Where: The Mandela, Joburg Theatre, Braamfontein

Book now: in person at Joburg Theatre Box Office, tel. 0861 670 670, or online at www.joburgtheatre.com or www.webtickets.co.za

Patrons can also book and pay via the Nedbank app and at selected Pick n Pay stores (full list at www.webtickets.co.za/pnpoutlets.aspx)

About the Creative Team

Originally from Pretoria, artistic producer and director Marcus Tebogo Desando started his career with PACT in 1989 as a singer and moved to Cape Town Opera in 1994 where his career as a director and principal singer started. As a performer Desando has appeared in over 75 operas, musical theatre productions and concerts in South Africa and abroad and is a Naledi Awards nominee for Best Actor in a Musical.

He travelled the world singing and directing with New York Harlem Productions, The Really Useful Company, Pieter Toerien Productions and Cape Town Opera and has over 40 productions ranging from operas to concerts under his belt, including a production of Rigoletto televised by SABC 2. As a proponent for change within the performing arts Desando has become a driving force in the development and training of young South African artists and aspiring arts administrators. His passion for the arts is exemplified in his leadership of Gauteng Opera and now as CEO of The Arts & Culture Trust. He has worked in executive positions as Artistic Director and CEO for Black Tie Ensemble, BTE VO1ss and Gauteng Opera.

Kimmy Skota is a world-renowned opera singer, best known for her performances with acclaimed Dutch violinist Andre Rieu, which led to her touring and performing around the globe. She has won several awards, including at the SAMRO International Singing Competition in 2008. Her opera repertoire includes Gilda in Rigoletto, Tatjana in Britten’s A Midsummer Night’s Dream, Adina in L’elisir d’amore, Sophie in Der Rosenkavalier, Sophie in Werther, Kristine in Miss Julie, Despina in Cosi fan tutte and Papagena in The Magic Flute. Her oratorio work includes The Messiah and The Creation. She also performed with Richard Cock in his Starlight Concert and Night at the Proms and has worked with internationally renowned conductors including Kamal Khan and Sebastian Lang-Lessing.

The young South African spinto-soprano Kelebogile Besong is emerging on the international opera and concert stages as a talent of unusually strong stage presence, sensitive musicianship and vocal power. Besong is the proud recipient of the 2012 Standard Bank Young Artist Award in Music.

Bass baritone Thesele Kemane is a graduate of the University of Cape Town and Juilliard School (New York) and has been part of the opera studio of the Frankfurt Opera. He previously participated in the Young Artist Program of the Glimmerglass Festival and was invited to the Accademia Nazionale di Santa Cecilia (Rome) where he worked with Renata Scotto. He also worked in Modena with Raina Kabaivanska and at the Internationale Meistersinger Akademie (Germany) led by Edith Wiens.

He made his stage debut in Der Spieler as Director of the casino, followed by roles in Les Troyens, Pelléas et Mélisande, Arabella, Il Trovatore, La Sonnambula, Billy Budd and From the House of The Dead.

On his return to South Africa in 2018 Kemane sang Baron Mirko Zeta in The Merry Widow. In Cape Town he has performed the title roles in Le Nozze di Figaro and Don Giovanni, in Il Barbiere di Siviglia as Don Basilio, The Rakes Progress as Nick Shadow, Tales of Hoffmann as both Lindorf and Dr Miracle, Viva la Mamma as Procolo, Il Viaggio as Reims and Don Prudenzio, and in Handel’s Messiah and Haydn’s Creation. He is currently a voice teacher at the Odeion Music School, University of the Free State.

Phenye Modiane was born in Ga-Rankuwa. In 2011, he sang the role of El Ramendado in Carmen and Ugqayinyanga 1 (Guard 1) in the premiere of Ziyankomo and the Forbidden Fruit in 2012, both produced by Opera Africa. He also sang the role of Ferrando in Cosi fan tutte in 2014 and Alfredo in La Traviata in 2015. In 2017 he performed as Beppe in Rita and the role of Rodolfo in La Boheme at Joburg Theatre and Durban Playhouse. Alongside his performing career he also serves as the MD of Johannesburg Opera.

Your Love Don’t Bother Me Welcome to Vegas, where Elvis has definitely not left the building, & still reigns supreme as the King of rock n’ roll in the entertainment capital.